The Curing Room depicts a group of Soviet soldiers who have been locked in a cellar and left to rot by their fleeing Nazis captors in Poland. All they can do is try to hold onto their humanity until their comrades find them, or until they starve.

Cynic: Have you considered that the nakedness was a deliberately provocative and ‘edgy’ decision designed to draw in more of an audience?

Optimist: It’s a realistic depiction of how POW’s are mistreated by enemies and an incredibly brave feat for the actors to perform for an hour and a half on a bare set with no opportunity to hide anything from the audience. Besides, we had no idea they’d be naked until it the show started.

Cynic: But if it’s such a serious and artistic decision then why is it played for laughs? We’re only a few minutes into the play before we hear: “Get over it men; it’s only a cock (*wink wink, nudge nudge*).”

Optimist: It’s referred to only once, at the very beginning, with a slight fourth wall break. The following hour and a half of the show only prove the truth of the joke; it’s just another part of the body and the events of the show are so harrowing and the performances so engaging that it’s the last thing on your mind by the end of it. It’s a superb, moving piece of theatre which I’ve found myself dwelling on since I walked out of the venue.

Cynic: Keep it in perspective; it’s not as if it’s saying anything new or original about the human condition. Sticking people in a room and depriving them of basic needs to watch what they do to survive has been done often enough before.

Optimist: Does every piece of art have to say something never before thought of by another human mind?

Optimist: No, this play isn’t the first to examine this situation but it’s the execution that’s so impressive. It’s impossible not to feel emotional while watching these men struggle to hold onto their humanity by desperately clinging to discipline, rank, and structure; even after they’re forced to eat their own dead.

Cynic: Okay- but who realistically cares about rank in a situation like this?

Optimist: That’s the strength of the play! The men themselves struggle to hold onto hierarchy and some sort of chain of command. But doing so is the only way they’re able to maintain any sort of civility or humanity. The stellar performances make it easy to believe that, for these men, it’s the most important thing in the world to maintain it.

Stephen: The Optimist in me wins this one easily. The Curing Room is a spectacular production and without a doubt the most moving play I’ve seen at the Fringe so far. If you’re in Edinburgh at all this month then I highly recommend you catch this one. 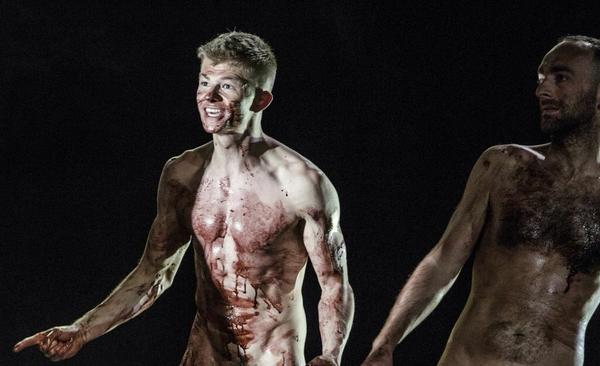